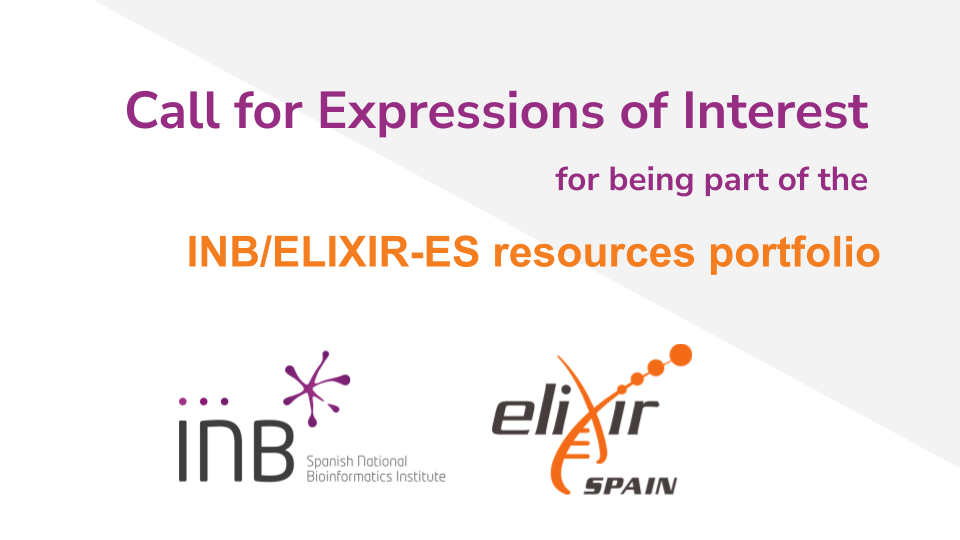 The Spanish National Bioinformatics Institute (INB), the Spanish node of ELIXIR, opens a public call for Expressions of Interest to join or renew their membership in this virtual infrastructure. The INB/ELIXIR-ES is currently composed of 15 computational biology groups organised as a virtual institute. It started operating in 2003 and is now funded by the Institute of Health Carlos III (ISCIII) for the 2021-2023 period. ELIXIR is the pan-European infrastructure for Life Sciences aiming to coordinate the development of bioinformatics infrastructure across its constituent members (22 national nodes and one observer as of May 16th, 2022 [1]). ELIXIR nodes provide the services to support biomedical research and, together with ELIXIR platforms, communities and focus groups drive technological developments in Life Sciences.

This call is put forward in the context of the renewal of the INB/ELIXIR-ES Service Delivery Plan (SDP) approved in 2017 after the approval of the adhesion to ELIXIR by the Spanish Government, as of March 10th, 2017, and the request for its endorsement to the Spanish Parliament. The renewal process will imply the revision and update of the existing portfolio of resources. Indeed, the SDP contains the resources that the INB, as the Spanish node of ELIXIR, contribute to this pan-European infrastructure and are aligned to the ELIXIR mission. Recognition of resources as part of the INB/ELIXIR-ES portfolio would contribute to seeking further funding for the resource and to emphasising the importance of the service to the user community. Indeed, this is a unique opportunity to provide an up-to-date portfolio of resources to the Life Science community as ELIXIR needs to revisit the services provided by its national Nodes periodically.

INB/ELIXIR-ES aims to identify already funded and well-established resources: tools, web-services, platforms and databases, which are aligned with the ELIXIR platforms, communities and focus groups. This catalogue of tools, web-services, platforms and databases will constitute the SDP offered by the INB to ELIXIR. The European Genome-phenome Archive (EGA), available at https://ega-archive.org, is an example of a currently funded service. EGA is a joint project co-managed by the European Bioinformatics Institute (EBI-EMBL) and the Centre for Genomic Regulation (CRG), part of the INB/ELIXIR-ES. Different projects in ELIXIR are articulated around EGA, which makes it a key resource for the organisation. Indeed, EGA is one of the few ELIXIR Core Data Resources. Other important resources include  three INB/ELIXIR-ES services that are recognised nowadays as ELIXIR Recommended Interoperability Resources: 3DBioNotes (3dbionotes-ws.cnb.csic.es/ws), DisGeNET (https://www.disgenet.org) and FAIRtracks (fairtracks.github.io/) being the last one the result of a collaboration with ELIXIR-Norway and EMBL-EBI.

The hosting group/s providing an ELIXIR resource benefits from the ELIXIR label in many ways. The ELIXIR label demonstrates that the resource is internationally recognised as an important resource for the user community; this will increase the exposure of the resource to the users, and comply with specific requirements that help ensure quality, reliability and sustainability. The ELIXIR label can be used when seeking additional funding for the resource. When applying to national and international funding, the INB/ELIXIR-ES resource can i) use the ELIXIR label, ii) request letters of support to the ELIXIR Director when appropriate, iii) benefit from additional financial support from national sources when included in larger initiatives, iv) have the possibility to participate in ELIXIR-led grant applications. Besides, the INB/ELIXIR-ES resource may i) participate in ELIXIR Commissioned Services, enabling the hosting group/s to receive funds from the ELIXIR budget for time-limited further development, adaptation or improvement of the resource, and potentially ii) become long-term Commissioned Services (‘Infrastructure Services’) so the hosting group/s receives funds from the ELIXIR budget to provide the service to the user community via ELIXIR.

A lightweight process has been designed to facilitate the submission, evaluation, and prioritisation of Expressions of Interest to be part of the INB/ELIXIR-ES resources portfolio. A template document is available at the end of this text that has been implemented in an electronic form. Table 1 contains the designed timeline for this process, and table 2 shows two Questions & Answers (Q&As) sessions aiming to facilitate the submission. Table 3 shows the application form fields implemented in an electronic application platform. The aim is that at least each Expression of Interest is reviewed by three-panel members. However, it will depend on the number of proposals. The four evaluation categories follow the model already used by ELIXIR-UK in 2016 for reviewing and increasing its portfolio of resources and services offered to ELIXIR [2]. Expression of Interests prioritised list might be made available to the general public, while the feedback by evaluation panel members will be only provided to submitters if requested. In this way, no resource will be damaged by a non-favourable evaluation by the selection panel.

Thus, the efforts to update the portfolio of tools, web-services, platforms and databases will contribute to getting the INB prepared for future ELIXIR evaluations, even if there is no specific relationship between the selection of resources with future financial resources. Indeed, the selected resources are expected to have their own funding and independence.

Applicants should submit their Expression of Interest using the electronic form that will remain open from Monday, May 30th 2022 until Thursday, June 09th 2022: https://bsc3.typeform.com/2022INBEoI

Table 1. General timeline for the Expressions of Interests for joining INB/ELIXIR-ES. This timeline can be updated according to the process needs.

Specific public sessions to assist with the process

Table 2. Specific sessions for assisting applicants in the process of submitting Expressions of Interest.